As my time in Zambia draws to a close, I’m starting to feel an ache at the thought of leaving. I can’t imagine not being surrounded by the colour and vibrance of day-to-day African life anymore, and I can’t imagine not spending my days amongst everyone I have come to know and care about at St Francis Hospital.

The cultural anthropologist Margaret Mead said “Never doubt that a small group of thoughtful committed people can change the world. Indeed, it is the only thing that ever has.” Whilst the current bunch at St Francis Hospital may not have changed the world, her quote still resonates. Of late I have been stealing moments to look around me at work… and as we clear through a packed outpatient clinic or attend to a ward emergency with the smoothness of a well-oiled machine despite all the challenges of a rural African hospital, I wonder if there’s anything we couldn’t do as a team if we put our minds to it.

A few weekends ago, on my weekend off, my phone rang on a Sunday evening just before dinner. It was one of the other doctors informing me that a road traffic incident had occurred nearby, and multiple casualties would be arriving, and could I come in. I did a quick change of clothes, grabbed my safety glasses, and my bag, and made my way in. On the 3-minute walk to the hospital, I bumped into two other doctors who had also made the change from Sunday shorts and t-shirts to scrubs and splash goggles. The team had been mobilized!

A flatbed truck carrying around 60 people along the Great East Road had swerved to avoid a bicycle, and had lost control, sending all the passengers hurtling out onto the tarmac. We reached the receiving area outside OPD, to find the large flatbed truck stacked with casualties (yes, after being flung out onto the road, they were then re-loaded onto it to be driven to the hospital). It was dark, and people were using mobile phones to provide a bit of light for offloading the patients. Despite the darkness, I was already able to deduce that there were a lot of casualties and some pretty serious injuries.

The floor of OPD was used as the triage area, with multiple casualties squeezing onto the handful of mattresses strewn around on the floor. We got to work triaging. The word triage comes from the French work ‘trier’ [to sort] and was first put to use to deal with multiple casualties on the battlefield in Napoleonic times. In its most basic form, casualties are divided into three groups: those who will likely live whatever care they receive, those who will likely die whatever care they receive, and those for whom immediate care might make a positive difference in outcome.

Our first aim was to get people off the floor in outpatients. We used stickers on foreheads to categorise people. Anyone who needed urgent attention was sent to the operating theatre or ward. The walking wounded that needed treatment that night were sent to a holding room to be reassessed later. If required, cannulas were put in, intravenous fluids put up, and pressure bandages applied before sending them on the journey from outpatients to the ward. There are only a handful of stretchers at St Francis, so the mass exodus of patients from the floor of outpatients involved piggybacks, precarious wheelchair rides and other forms of ingenuity.

Inwardly, I think most of us felt fairly out of our depth at various times throughout the evening, and yet outwardly, as a team I think we looked pretty calm and collected. There were understandably moments of panic, such as when a severed hand was found in the truck. I just heard a nurse going around saying “has anyone seen someone without a hand? I have a hand here…”

Everyone mucked in and did whatever jobs were needed. The doctors were busiest early on in the incident, when triage and decision making was needed. However, later on once all our management plans needed carrying out, the nurses were suddenly the busy ones. So at midnight, myself and another doctor from the medical team did the intravenous antibiotic drug rounds on the male and female surgical wards to help out the nurses.

When I left the hospital that night, there were six little toddlers with deep scalp lacerations and head injuries side by side in a bed. We didn’t know their names, or who their Mum’s were (as their Mum’s were probably in theatre or too injured to go around locating their babies), so the children had temporary names like “blue trousers, floral t-shirt” to identify them. But, don’t worry, I can happily say that all of these toddlers made good recoveries, and they were all reunited with their families over the course of the next few days. 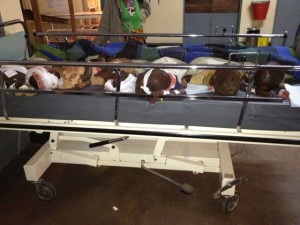 As with any major incident, the evening helped to revealed some of our weaknesses and learning needs to us – not least the fact that we didn’t have a major incident plan for the hospital, nor did we have a designated receiving area for triage. However, it also showed us some of our strengths. The events that evening made me realize that there might not be many of us, and we might not be the most skilled or experienced clinicians around, but we are a team… and a pretty good one at that. 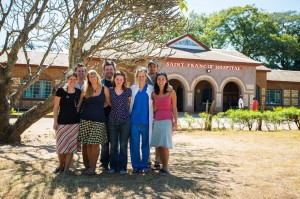