HIV/AIDS tends to be the first disease that springs to mind when thinking about Africa. However, on speaking to an infectious disease consultant in July 2012 for some last minute clinical advice before my big move to Zambia, it was Tuberculosis (TB) that dominated the conversation.

After I finished picking his brain about some of the things I might encounter in Zambia, his exact words were “you do know what the biggest threat to you is out there?” to which I quietly mumbled the correct answer: “TB…”

Tuberculosis is an infectious disease caused by Mycobacterium tuberculosis. It is an ancient disease, with evidence found as far back as 3000 BC in the spines of Egyptian mummies. However, it was in the 19th and 20th centuries that TB first became a major public health issue (known then as the consumption) causing widespread illness and death. Transmission was helped along significantly by poverty, overcrowding and lack of sanitation, problems still faced in many parts of the world today. Roughly one-third of the world’s population has been infected with M. tuberculosis, and new infections occur at a rate of one per second on a global scale.

Once a person has been infected, TB can sit latent inside the body without causing active disease. Many people clear the bacteria and never develop symptoms of TB, but this requires an intact immune system. When you throw HIV into the picture, TB has a new aggression, and my time here in Zambia has proven to me that I should believe the WHO statistic that TB is responsible for one quarter of all deaths in HIV.

TB most commonly affects the lungs, but can affect almost anywhere in the body. Since moving to Zambia, I have seen abdominal TB, TB adenitis (TB of the lymph nodes), TB spine, TB meningitis, TB of the spleen, and TB of the adrenal glands. I have seen a teenager crippled so badly by TB that he is permanently bent double and can barely walk. His X-ray (below) shows how much destruction TB can cause to a spinal column that should be as straight as an arrow. I see patients coughing up blood and struggling to breathe, and neck lymph nodes so big and matted that the patient could barely turn their head. I have also seen far too much death at the hands of TB, and I know it is a disease to take very seriously. 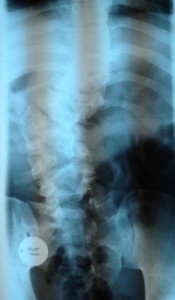 TB is spread from one person to another when a person with active TB of the lungs coughs, sneezes or talks sending infected droplets out into the environment. The people at risk are those who are in enclosed spaces with someone who has active lung TB and is coming into frequent contact with these infected droplets… therefore, family members, household contacts… and healthcare workers.

I have a small wing off the side of my main ward called the Khonde [verandah] for people who have confirmed or suspected open TB. Back home, entering such an area would involve protective gear including a special facemask, apron and gloves. Here, given that we lack alcohol hand gel, it goes without saying that personal protective equipment is lacking. I just have to hope that despite coming into contact with copious amounts of TB that my immune system does its job…

Got anything to say? Go ahead and leave a comment!