The rains came, and oh boy, did they come! The Zambian wet season introduced itself to me by producing 12% of its average rainfall for the season in just one night!

The rains decided to arrive during a weekend away to South Luangwa. The drive there was in blistering sunshine, but on entering the park, we could see an ominous black cloud forming… by the time we arrived at our bush camp deep within the park, we could hear low rumbles of thunder, and the wind had picked up speed.

I was alternating between feeling excited about my first Zambian rainstorm and annoyed at the thought of a wet weekend away. However, Will and all the guides at the camp reassured me that the rains tend to come as short, sharp bursts, with the sun coming out immediately afterwards.

The rain stayed away on the first day, and we had a spectacular encounter with an 18-strong pack of African wild dogs and introduced them to BeetleCam! It was my first time seeing wild dogs. The two hours we spent watching them play as they annoyed buffalo was one of my favourite wildlife encounters to date. 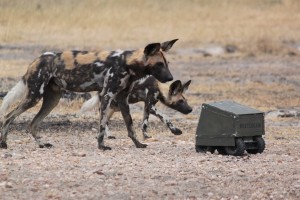 A few hours after we saw the wild dogs, as we sat down to eat dinner on an open-air deck overlooking the Luangwa river, the heavens opened. There was none of this short, sharp business I had been told about. The heavens stayed open all night long. Lightning lit up the night skies, followed immediately by deafening, jump-out-of-your-skin thunder! Lagoons formed, rivers rose and the roads turned into streams with steep quicksand banks. The rains also brought out the flying ants, who plagued dinner by insisting on dive-bombing us and getting stuck in our food.

The camp where we were staying was just about to close for the wet season, we were the last guests of the year. The tracks leading to the camp also close in wet season as they become impassable. Impassable is not an exaggeration. For our remaining days at the camp, we had to make do with walking safaris and occupy ourselves with the little creatures around camp, such as monitor lizards, while waiting for the roads to dry out sufficiently. 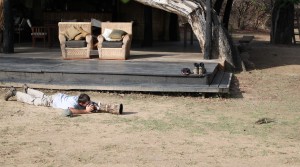 The walking safaris showed us the full extent of the effects of the storm. As Will stood knee deep in soft mud on the banks of a newly formed stream, his excitement at the thought of putting his Land Cruiser to the test was tangible. South Luangwa after an epic rainstorm provides a truly exciting 4×4 assault course!

The Land Cruiser showed its worth, and fared very well with soft mud, deep ruts and with the rivers and lakes that had swallowed up the roads. We travelled in convoy with two other Land Cruisers and a 4×4 tractor, which was deployed each time one of us got stuck (about twice each). 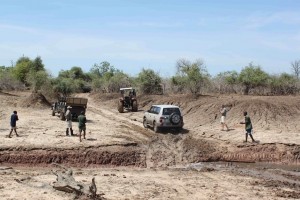 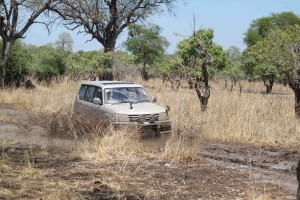 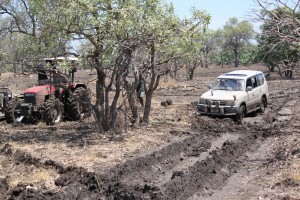 Only a few days have passed since the first rain and the country has already undergone remarkable transformations. Little green shoots are peeking up from the ground, trees are changing colour, and a lot of dust has left the air.

The storm was definitely exciting and the 4×4 assault course that was South Luangwa National Park was also a lot of fun. I will always prefer sunshine to rain, and I don’t think I will ever deliberately seek out rain for a holiday. However, I know that the flying ants, sideways rain and mud splattering are all vital in helping me to really get to know Zambia, warts and all.