After spending a long weekend in South Luangwa, I have now seen where Will spends his time working here in Zambia, and I am quite jealous. Whilst the hospital has its charms, the spectacular natural wilderness that is Will’s workplace is on another level.

Being married to a wildlife photographer means that going on safari is not something new for me. However, this time, as Will drove me through the main gate into the national park in our own vehicle it felt very different and exciting.

This was my first self-drive safari. South Luangwa is not a very busy park, and certain areas of the park are quieter than others, so it is easy to do an entire game drive without seeing another vehicle. I wondered if I would feel apprehensive about not having a driver or guide, especially with regards to navigation and temperamental animals such as elephants. However, Will is in his element out there, and it felt really special to have him to myself, whether we were talking, laughing, or just sitting in silent appreciation at the scenes in front of us. 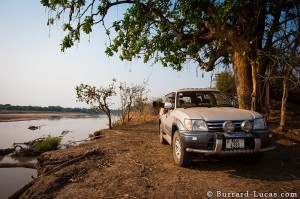 On arrival at our first lodge, I met Will’s new work colleagues and we sat down to lunch overlooking a watering hole with grazing antelopes and elephants passing by. As we tucked into a Mediterranean tart and three different fresh salads, I spotted the irony that going on safari was no longer the escape from civilization that it used to be for me, but was now actually a return to it. The special safari touch, the creative and tasty food, the crisp linen bed sheets and the current affairs conversation about events beyond Katete made me realize just how much my life has changed by being at St Francis. Even the most remote bush camp managed to highlight how many creature comforts I have been living without.

Whilst a stand-up shower with hot water did feel pretty damn good, and burying my face in the fluffy towels that smelt of fabric softener did draw a big smile, and the passion-fruit cheesecake continues to make me salivate, it isn’t those fancy finishing touches that made the weekend for me. It was watching Will behind the camera in his new place of work, creating images to take my breath away. It was seeing BeetleCam in action for the first time, as we got to know seven obliging lions over their evening meal and a morning playtime. 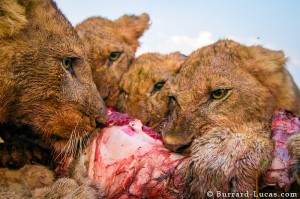 On our final morning in the park, as Will and I stood beside the shallow, clear waters of the Kapamba River, we commented on two things. Firstly, that we felt blissfully content. Secondly, that this country is one of stark contrasts… with poverty and HIV/AIDS alongside immense natural beauty and wildlife… where a doctor and wildlife photographer are able to follow their dreams within the same province of Zambia, in two settings that feel more than a world apart. 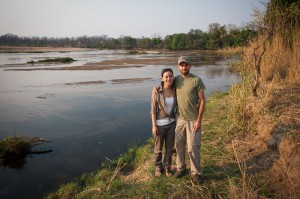