Although we are a long way from home, our weekend had parallels with that of a lot of people in the UK.

The last weekend of August in London sees crowds of people flocking to the Notting Hill Carnival to dance, drink, eat some jerk chicken and jostle through crowds.

On the same weekend in Katete, crowds of Chewa people flock to the Kulamba festival from all over Zambia, Mozambique and Malawi to dance, drink, eat some dried fish and jostle through crowds… as well as pay homage to Paramount Chief Kalonga Gawa Undi and give thanks for a good harvest.

The locals have been talking about Kulamba all week at the hospital, but I had no idea what to expect. As we followed the crowds down a dusty dirt track towards the festival, the atmosphere was electric. There were swarms of people all around, young and old. Through the loud chatter and shouts of the crowd, I could hear the faint sounds of a beating drum. Lining the path were makeshift stands selling wares of every kind. There was more choice than in most shopping malls, with pans, shoes, torches, buckets, blankets, toiletries, and (disturbingly) kitchen knives! 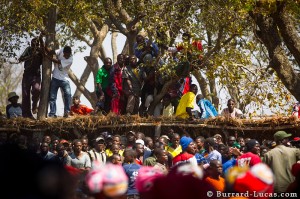 We were a little bit confused by the festival itself, but we spoke to various locals and officials and managed to get a general idea of what was happening. It seems that once a year, Chewa chiefs come to Kulamba to give their harvest reports and traditionally gave offerings from harvest to the Paramount Chief. Nowadays, they no longer give crops, but instead give large and unusual gifts including fridge/freezers, mattresses and bedside tables. 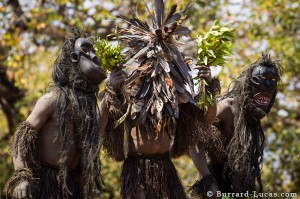 For me, the highlight was the Nyau dancing, featuring nimble, masked men covered in mud. The Nyau is a secret society of initiated Chewa people who are said to represent spirits and communicate with ancestors when they dance. Some of the masks were quite menacing, and their dancing was mesmerising as their fast-moving feet flicked earth and stirred up the dust. 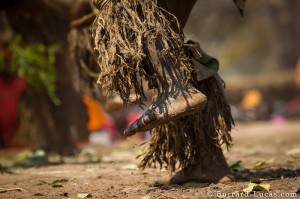 Today was a great insight into the values and traditions of the local people. I felt privileged to experience such an authentic and important part of local life. 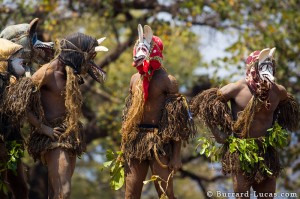 The Great East Road has been swarming with activity all evening as people go home from Kulamba. Bicycles and pedestrians share the dust at the edge of the tarmac, while open trucks overflowing with impossible numbers of people speed by at 80kph. Daredevil overtaking, broken headlights and alcohol are just some of the dangers out there tonight. As doctors in London take a deep breath bracing themselves for the Notting Hill Carnival fall-out, I sit here wondering what is in store for us at St Francis Hospital as a result of these festivities!